Ron really knows his way around a flipboard, as anyone who’s spent time with him in the classroom can attest. With marker as his medium, students have been enjoying his live line drawings for well over 30 years. Some of his most famous works—which he continues to practice month after month and year after year—are the infamous 5-Line Model and the popular Goal-Line/Soul-Line sketch.

Sometimes, as in February with the CHH class, he even draws the 5-Line Model with invisible ink, and everyone in the room can still see it! But that’s another story …

In the March Soul-Centered Living class, the students appreciated Ron’s drawing talent more than ever.

He had been speaking about the Soul Line of life, and how it seldom is a direct route. We go off course, we get feedback, we go off course again, find our way back to center, we go off in another direction, and on it goes. Regardless, even when it doesn’t feel like it, we are moving up the Soul Line. Naturally, this was accompanied by a live illustration of the concept.

At the end of this talk, he turned to Mary and Licia and asked if there was anything they wanted to add. Licia asked Ron if he could tilt the easel so the other side of the room could see what he drew.

He laughed, “And because it’s such a beautiful piece of art, I’ll even sign it!”

Class resumed, and at the break, an assistant mentioned to a friend in private conversation that he’d really like to have that graphic.

What followed was extraordinary.

The students were genuinely relating to this as a piece of art drawn in the sacred USM energy field and signed by Ron. After all, it was Spiritually charged and had some powerful energy on it!

Shortly thereafter, Jesse playfully announced over a mic that he loves the piece and he also knows of a student who wants to buy it for $50. Licia responded from the stage that another student approached her and would pay $100.

Another student called out that he would pay even more!

And right then, the room spontaneously erupted into a bidding war with several students participating! Ron conducted the auction, which crescendoed to two students, back and forth, outbidding one another by $50 increments—straight up to $750!! 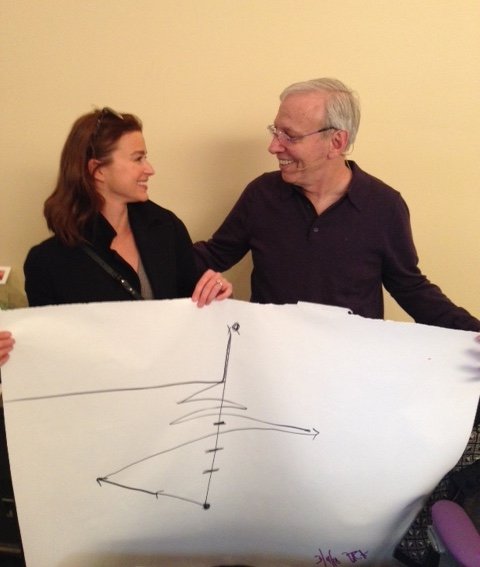 After the weekend, Ron shared,

“My experience was one of fun. The best part for me was the class getting into it. It was as if each upward bid was a new ‘high’—not of the money but of the excitement, awe, and wonder. We were all kids together. I loved it.”

Perhaps Ron found his new calling as a fine artist! We might find this on the cover of the New Yorker, particularly, if they do a feature on the Soul Line of Life as it relates to finding your Life Purpose. An artist can dream…